Steve Mason (Steve Mason Plant & Commercial) of Crinow, Narberth, was a real character with a wicked sense of humour and a cheeky grin. Steve sadly passed away just days after his 51st birthday in March 2015 having been diagnosed with metastatic pancreatic cancer in January 2014.

In March 2016, Steve’s family and friends held a memorial charity evening in his honour at Nant-y-Ffin Motel, Clynderwen, as a celebration of Steve’s life. The event, attended by over 170 people, and along with other donations raised over £14,000 for local healthcare services which supported Steve and his family during his illness.

The Mason family – Helen, Steve’s wife, and their daughters Christina and Vicky, wanted to say thank you to two very important places on Steve’s journey – the Chemotherapy Day Unit at Glangwili Hospital, Carmarthen, and Ty Bryngwyn Hospice at Prince Philip Hospital, Llanelli – where Steve was supported at the start and end of his courageous battle with cancer. 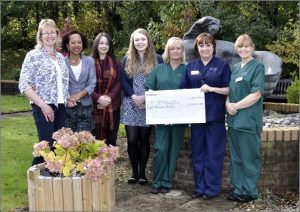 The family recently presented a cheque of £6,000 to the Chemotherapy Day Unit at Glangwili Hospital and a cheque of £8,000 Ty Bryngwyn Hospice.

Helen Mason said: “The Chemotherapy Day Unit at Glangwili Hospital offered support not only to Stephen but to all of us as a family. The kindness and compassion of the staff made Stephen’s time there more bearable and comfortable. They were always at the end of the phone to offer any advice and reassurance during the months of chemotherapy that Steve had to endure.

“Steve’s last few days were spent at the inspirational Ty Bryngwyn Hospice, a dedicated centre of excellence providing specialist palliative care. We were able to stay with Steve day and night which was so important during his last few days. The staff were able to make Steve’s final days as dignified and as comfortable as possible, offering support to us as a family as well as to Steve.

“We, as a family, have been overwhelmed by the response we received from local businesses, family and friends and are very proud that we have raised £14,000 in Steve’s name. Steve was a well-liked and well-respected individual, the amount of money raised in Steve’s memory is indeed a tribute to Steve and the man that we all knew and loved.

“We would like to thank everyone for their support and generosity, and give a special thanks to the All Wales Truck and Transport Show for their donation of £2,000 to our fundraising”.

Copyright © Ty Bryngwyn Llanelli Hospice. Registered charity 702507.
Unauthorised use and/or duplication of material on this site without express and written permission is strictly prohibited.
Web Design by Paragon Consultants